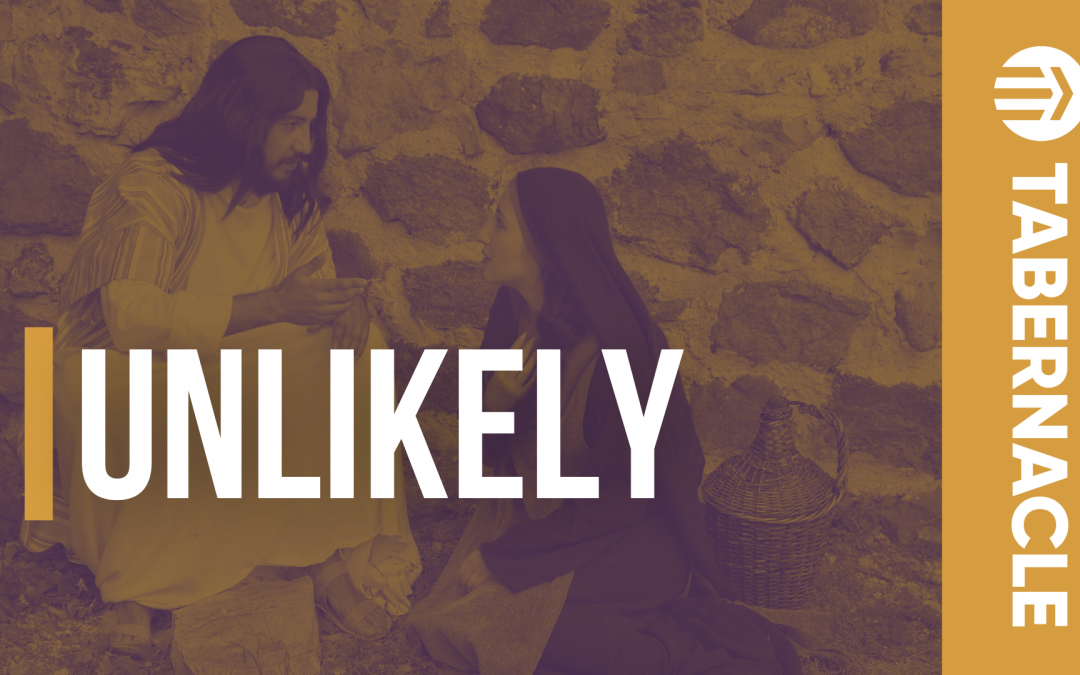 This man spent his entire adult life waiting for the Messiah. He spent his entire professional life studying the relevant scriptures and teaching them to the nation of Israel. Jesus himself calls this man the teacher of Israel. This man is Nicodemus. Nicodemus should have immediately recognized Jesus as the Messiah and the Son of God.

The Gospel is an unlikely message.

For the preaching of the cross is to them that perish foolishness; but unto us which are saved it is the power of God.

God’s work is an unlikely work, and he chooses unlikely people from unlikely places to accomplish his unlikely mission of saving a lost and dying world. You might be thinking it’s unlikely that God would save you because of your sin. You might be thinking it’s got God is it’s unlikely that God would ever use you because of the generational sin in your family or your social standing. However, the truth is God loves you and he will use you despite all of your baggage. When God uses the least likely, He brings the most glory to himself when he accomplishes his mission.

1So then, when the Lord knew that the Pharisees had heard that He was making and baptizing more disciples than John 2(although Jesus Himself was not baptizing; rather, His disciples were), 3He left Judea and went away again to Galilee. 4And He had to pass through Samaria. 5So He *came to a city of Samaria called Sychar, near the parcel of land that Jacob gave to his son Joseph; 6and Jacob’s well was there. So Jesus, tired from His journey, was just sitting by the well. It was about the sixth hour.

7A woman of Samaria *came to draw water. Jesus *said to her, “Give Me a drink.” 8For His disciples had gone away to the city to buy food. 9So the Samaritan woman *said to Him, “How is it that You, though You are a Jew, are asking me for a drink, though I am a Samaritan woman?” (For Jews do not associate with Samaritans.) 10Jesus replied to her, “If you knew the gift of God, and who it is who is saying to you, ‘Give Me a drink,’ you would have asked Him, and He would have given you living water.” 11She *said to Him, “Sir, You have no bucket and the well is deep; where then do You get this living water? 12You are not greater than our father Jacob, are You, who gave us the well and drank of it himself, and his sons and his cattle?” 13Jesus answered and said to her, “Everyone who drinks of this water will be thirsty again; 14but whoever drinks of the water that I will give him shall never be thirsty; but the water that I will give him will become in him a fountain of water springing up to eternal life.”

15The woman *said to Him, “Sir, give me this water so that I will not be thirsty, nor come all the way here to draw water.” 16He *said to her, “Go, call your husband and come here.” 17The woman answered and said to Him, “I have no husband.” Jesus *said to her, “You have correctly said, ‘I have no husband’; 18for you have had five husbands, and the one whom you now have is not your husband; this which you have said is true.” 19The woman *said to Him, “Sir, I perceive that You are a prophet. 20Our fathers worshiped on this mountain, and yet you Jews say that in Jerusalem is the place where one must worship.” 21Jesus *said to her, “Believe Me, woman, that a time is coming when you will worship the Father neither on this mountain nor in Jerusalem. 22You Samaritans worship what you do not know; we worship what we do know, because salvation is from the Jews. 23But a time is coming, and even now has arrived, when the true worshipers will worship the Father in spirit and truth; for such people the Father seeks to be His worshipers. 24God is spirit, and those who worship Him must worship in spirit and truth.” 25The woman *said to Him, “I know that Messiah is coming (He who is called Christ); when that One comes, He will declare all things to us.” 26Jesus *said to her, “I am He, the One speaking to you.”

27And at this point His disciples came, and they were amazed that He had been speaking with a woman, yet no one said, “What are You seeking?” or, “Why are You speaking with her?” 28So the woman left her waterpot and went into the city, and *said to the people, 29“Come, see a Man who told me all the things that I have done; this is not the Christ, is He?” 30They left the city and were coming to Him.

This story is nothing less than a divine appointment between Jesus and this woman. It reaches across ethnic, racial, political, and religious lines. This tension spread for thousands of years and much blood had been shed over this divide.

For the Samaritans, the well was a point of pride because they were able to trace their lineage back to Jacob as the descendants of Joseph. They’d been ostracized from the rest of the tribes of Israel historically. The ostracism was so extreme that the Jews took a much harsher, longer trip around Samaria to avoid interaction with the Samaritans.

So, Jesus’ meeting with the Samaritan woman was a point of reconciliation for the Samaritans to come back into a covenant relationship with God through Jesus Christ.

Jesus commands this woman to give him a drink. This single act would have made Jesus unclean based on Jewish tradition. The Samaritan woman responded in surprise because of the long tradition of opposition between the Jews and Samaritans.

The man had no bucket or canteen, but he was offering her living water to drink. She was purposely leaving at the hot of the day, so as not to deal with anyone. This woman was burdened with heavy jars to carry water, thinking that her burden was not getting any lighter after leaving the well. You might feel as though your burden is getting heavier with each day.

Fortunately, the Gospel is not like a religion of works. The gospel removes burden and gives freedom and healing.

Jesus offers her living water that springs up to everlasting life. With a well, you have to lower the bucket down into the water and pull it back up to yourself. With a spring, the water is in the ground and it comes up to you. There’s no work. You just drink.

Living water has come to us in the person of Jesus Christ. There was nothing we could do to make God go look at them while we were yet sinners. Christ became a man. God came to us. We could do nothing to go up to him. That’s the picture of the well and the spring.

God is spirit, and those who worship him must worship him in spirit and in truth. The father is seeking a people who will worship him.

He has sought me and he’s seeking you. The spirit of God is seeking each and every one of us, whether it’s to repent and believe for the first time or to take off the mask and reveal who you really are in Christ.

The only way we can worship truly is by having the Holy Spirit come and live inside of us and transform our heart and make us a new creation. When you confess Christ and believe in your heart, you will be made a new creation.