Are You Ready to Come Clean? 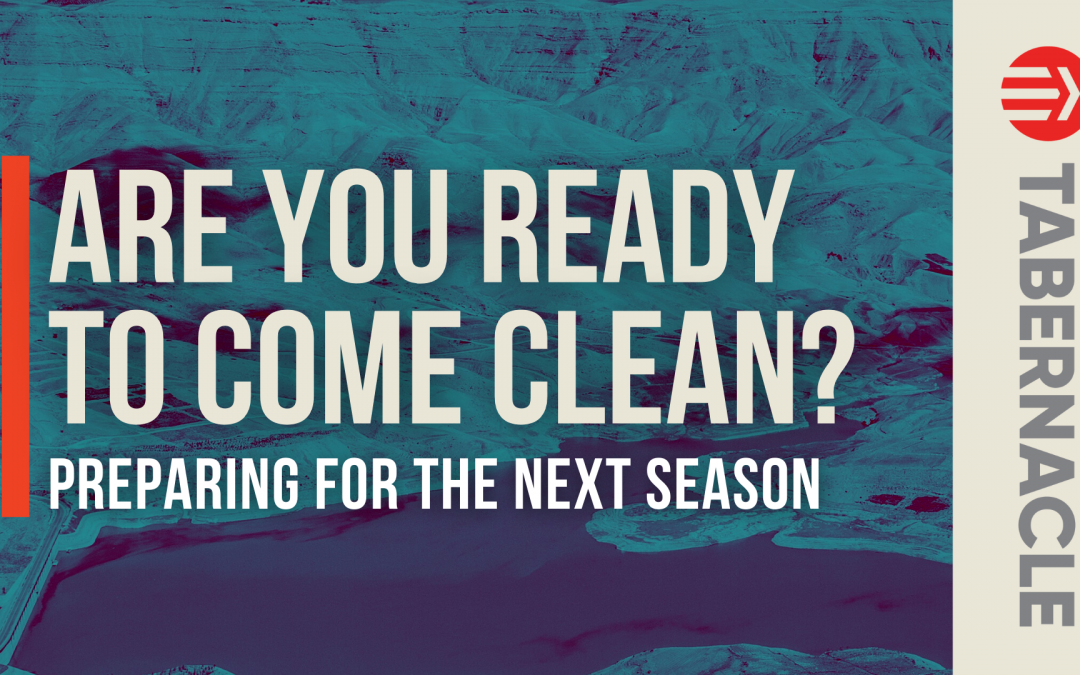 Perhaps you’ve heard about the family talking about experiencing new things, a family that had lived out in the country. They had never been to the city, so they went to a high-rise hotel downtown.

The father and the son went into the lobby to check-in while the mom stayed in the car. The father and son saw an elevator for the first time. They didn’t know what it was. They walked over to it, watched an older lady enter it, and saw the box shut and the numbers go up.

They stood there wondering where she was going and how this thing worked. Then, about 20 to 30 seconds later, the doors opened. A beautiful young lady walked out. The father is stunned. He looked at his son and said, get your mother!

God wants to do something to your spiritual DNA.

God is using this season to work in our lives and prepare us for a new chapter. You’re not going to sit idly by in these months as you wait. Instead, you’re pushing forward with the mission that God has called you to.

In the book of Joshua, we’ve learned that God raises this new leader, mentored by Moses.

What It Means to Consecrate

Here’s what Joshua tells the folks in Joshua. Consecrate yourselves because the Lord will do wonders among you tomorrow.

Consider this definition: It means to be clean or to make clean.

There was a real physical component to this for the Israelites, but we need to also look at the spiritual sense. It means to be untrained by sin. We must be cut loose from the world’s influence. Through Jesus, we are cleansed, and we need to walk in righteousness daily.

God’s blessings are primarily contingent upon our righteous living. However, we often want to experience this incredible adventure in Christ and abundant life and the blessing of God while still living contrary to His design. But God longs for us to be clean to be used by Him.

In Joshua’s case, he knows they are ready to enter this land that has been promised for generations. They need to cross the Jordan River. They need to defeat their enemies. But to do it, they need to cleanse themselves spiritually and physically.

The Battle of Jericho

Many of us know the Battle of Jericho. It was the first conquest of God’s people as they moved into this new territory. They marched around the walls for six days, and on the seventh day, they cried out to God. This unusual strategy led by the Lord caused the walls to crumble, giving God’s children victory.

After the victory, God made it clear that none should take any treasures for themselves.

But the lust of the eyes, flesh, and pride in one’s possessions is one of the most dangerous temptations humans face. One man would fall to his selfish desires and threaten everything for God’s people.- – –

As you enter this new season, pray for the person who will become your pastor. Pray that God speaks to us and guides us. And pray that God strengthens your new pastor through these courageous leadership traits and more as he shepherds this great church.

When There is Sin in the Camp

Achan took some of the treasure. It was supposed to be set apart for the Lord.

After an incredible victory, God’s army fights again. But, this time, they suffer a significant loss. Joshua doesn’t know what to do, so he does the one thing he can always rely on: he prays to God. He asks what has happened that the Lord has let them taste defeat.

The Lord’s anger burns and Joshua learns that their significant loss was because of one man. There was sin in the camp.

Joshua and the people go through a process of elimination. They found out that it was Achan. Because there was sin and Achan was unclean, everyone suffered.

Achan confessed to Joshua that he had sinned. He saw treasures, and he wanted them. Achan coveted them. He had selfish desires and chose to disobey God because he wanted more than he had.

That’s what happens when you covet. You don’t check it. And then, all of a sudden, you pursue that. You embrace the very things contrary to God’s design for your life.

Because Achan failed to consecrate himself, he failed and gave into desire. Then he tried to conceal it. Like Adam and Eve, after they sinned, Achan felt shame. He had hidden what he stole. Part of shame makes you try to hide, and you conceal what you’re doing.

God Knows You Better Than Yourself

So what is it that you’re hiding right now from being exposed? If you have to hide something, more than likely, it’s violating God’s command and design.

If you don’t confess it, then you experience catastrophe.

Joshua sent messengers to the tent to retrieve all the things that Achan had taken. But unfortunately, Joshua’s people suffered a great loss of life and defeat because of Achan’s sin. As a cost of this great sin, Achan and his family were stoned to death.

When you live in sin, you think you’re hiding and getting away with something, but God knows everything. Furthermore, since you are part of a church family, your sins and their consequences affect everyone.

Some of you may be here as a parent or spouse, and your family is in disarray because of your sin– because you don’t sail alone. This is not a Lone Ranger relationship. You’re in community with your family; you’re in a community with a Tabernacle family. Everybody affects everybody else.

Look at what God says after Joshua’s defeat: consecrate yourselves. Before they could fight their enemies again, they had to cleanse themselves.

Don’t you, as the Tabernacle family, as an individual follower of Christ, want to be able to stand against the enemy? That’s when we consecrate ourselves daily.

The Lord is a loving God. He wants to embrace you, love you, forgive you, cleanse you, use you, restore you, and empower you.

So right now, would you come clean before the Lord?

Pray to your heavenly Father, ask Him to forgive and cleanse you, and walk in His will.