Don’t Go There! Refusing to Compromise 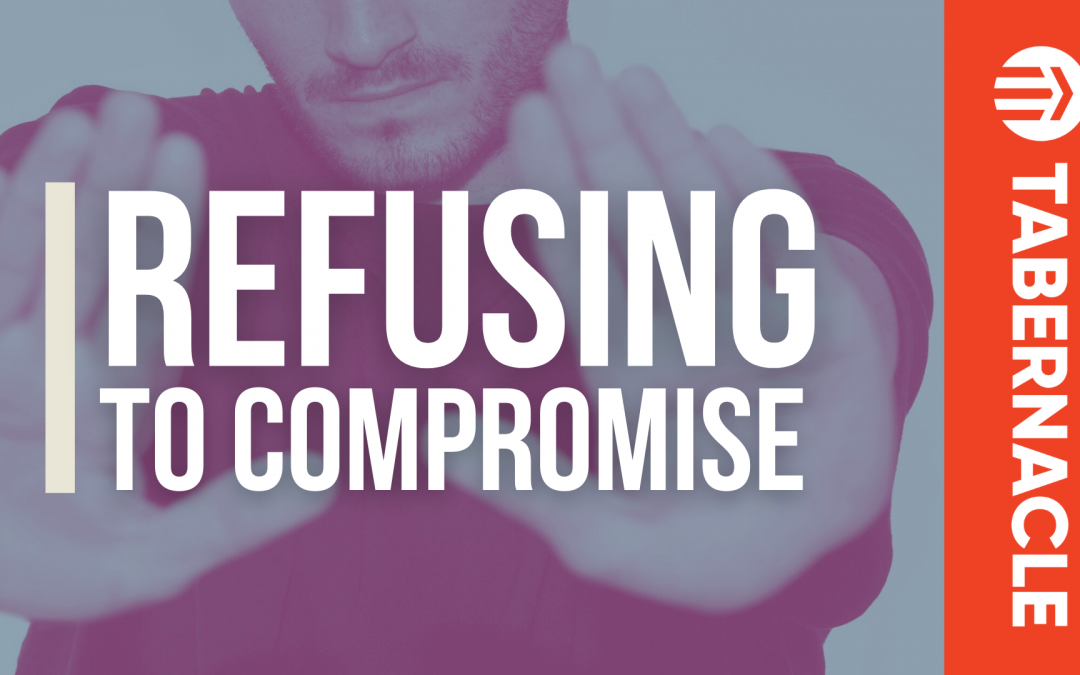 When we compromise on core convictions of our faith, we expose ourselves to vulnerable conditions. As the nation moves towards secularization, the church must stand guard against compromise in order to protect the presence of God in our churches. We must watch for the “gathering storm” of today, which is secularization.

A secularized church removes God from her midst. I’ve seen a church that conducts secular, nonreligious and religious ceremonies for families, conducting baptisms without ever mentioning God. There are others that believe in Christianity LITE – compromising the strength and integrity of the gospel of Jesus Christ.

There are two definitions of compromise:

The Bible warns us of this type of compromise in Revelations 2:12-17:

12 “And to the angel of the church in Pergamum write: ‘The words of him who has the sharp two-edged sword. 13 “‘I know where you dwell, where Satan’s throne is. Yet you hold fast my name, and you did not deny my faith[b] even in the days of Antipas my faithful witness, who was killed among you, where Satan dwells. 14 But I have a few things against you: you have some there who hold the teaching of Balaam, who taught Balak to put a stumbling block before the sons of Israel, so that they might eat food sacrificed to idols and practice sexual immorality. 15 So also you have some who hold the teaching of the Nicolaitans. 16 Therefore repent. If not, I will come to you soon and war against them with the sword of my mouth. 17 He who has an ear, let him hear what the Spirit says to the churches. To the one who conquers, I will give some of the hidden manna, and I will give him a white stone, with a new name written on the stone that no one knows except the one who receives it.’

Pergamum was a center of worship in the Roman empire where many idol gods were worshiped. It was a political, educational and religious stronghold in which the followers of Christ were tempted to compromise.

In the letter to the church in Pergamum, Jesus begins with their commendation by sharing that in spite of the evil culture of their environment, He noticed that they were unashamed of the gospel and power of Jesus. They didn’t deny Jesus even after witnessing the murder of their friend and brother in the faith, Antipas. As the nation becomes more secularized and the standards are lowered, as followers of Christ, we must be willing to hold on to the name of Jesus and identify with the mission of Christ, no matter what. In the midst of this gathering storm of secularization, we must still stand on God’s Word.

Jesus noticed that some of the members of the church were holding on to the teachings of Balaam. Balaam was a diviner who wanted to curse God’s people. When he couldn’t curse God’s people, he taught the Israelites to compromise and be unfaithful to the Lord by eating food that was sacrificed to idols and by committing sexually immoral acts.

This church was clear on how to live according to the gospel, yet they were still dabbling in the things of the world. Trying to maintain a balance in the spiritual and the natural world will cause us to be overextended and double-minded. If we are trying to live in the spiritual world at the same time that we’re trying to live by the world’s standards, we are opening the door for compromise and spiritual apathy to creep in.

While this church hadn’t denied the name of Jesus, they were still involved in idol worship. This may not seem as relevant today, but actually, an idol is something you turn your attention, allegiance, and affection to other than God.

So what is the cure when you are caught up in this world? What do you do when you love the world more than you love God? The cure is repentance. In Revelations 2, Jesus is calling the church to repent from compromising when it comes to sexual immorality, worshipping idols, and serving their flesh and other idol gods. For us, repentance will take deliberate, actionable steps.  We must turn away from our sins and follow Jesus. This may require you to get into a good church, fellowship, read your Bible, and get involved with your church community. It’s important to surround yourself with people who love you, encourage you, and who are making the same commitment to serve and dedicate their lives to Jesus Christ.

Jesus warns them that He will come to administer judgment. When God’s people entered the promised land, they were told to drive out all the inhabitants and to tear down the idols. When they didn’t do what God told them to do, it brought on oppression from the inhabitants because they did not obey what God told them to do. They compromised. They didn’t tear down the idols and eventually, they found themselves worshiping those idols.

When we don’t remove the things in our lives that we should’ve driven out, we can find ourselves later oppressed by those very idols. What are the things in your life that need to be driven out of your heart, your home and your life? If you are allowing things to govern your life that are outside of God’s design, it’s time to turn away from compromise, tear down those idols and repent.

Jesus tells this church that if they conquer these issues through repentance they will become conquerors. We must come to a place where we don’t only see Christianity as a hobby, but we are committed to dedicating ourselves wholeheartedly to Jesus. In this commitment, we live by God’s manna, we inherit heavenly blessings and we receive supernatural provision and sustenance that comes freely to those who trust in God.