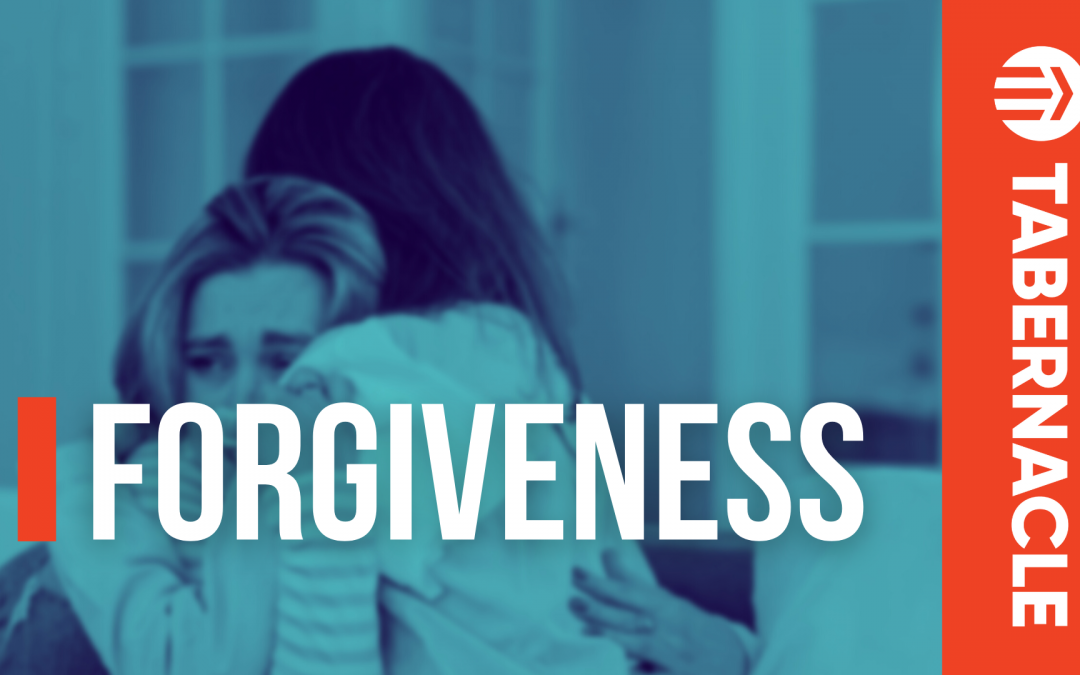 WATCH THE SERMON
Forgiveness. This world operates on a principle of unforgiveness in retribution – we see this played out constantly. Everywhere we look, we see it on the news where people are assaulted or killed for something that they’ve said or done, sometimes even just for being in the wrong place at the wrong time. We a cycle that follows from that, which is a cycle of hatred. There’s an offense and then unforgiveness and then revenge and the cycle repeats. We see the devastating results of this unforgiveness all the time. As one gang wars against another gang or one race hates another race simply for the color of their skin. We see this in our friendships where friends who were once close and had great and sweet fellowship now can’t stand to be in the same room together because of an offense. Even in the families we see in the world where family that once was tight knit and together is now divided.

We shouldn’t be surprised when we see this, because this is the world’s paradigm. This is how the world operates. They don’t know the forgiveness of God, so they cannot forgive. However, the church operates off of a different paradigm because we have experienced forgiveness from God. It gives us a platform to offer forgiveness to others when we are sinned against. That does not mean that forgiveness is easy, right? We acknowledge that forgiveness is hard. Forgiveness may be one of the most difficult things in the Christian life when we have to humble ourselves and say, “I’m sorry.”

Sometimes when we were wronged first and then we made a bad reaction to that and we have to go back and apologize for the poor reaction. It’s hard when we’ve been wounded deeply and the pain has been there for days, weeks, months, even years to go back and offer forgiveness. It’s tough. Whoever said that living a Christian life is easy, they lied to you, my friend, because it’s not easy. It’s hard. And we are called to higher standards. And one of those standards is our standard of forgiveness

In Matthew 18 Jesus had been teaching unforgiveness beginning in verse 15, and then after his teaching, Peter asked a question about forgiveness. Jesus answers the question, and then Jesus backed up his answer with a parable. And beginning in verse 21, we see Peter. Peter then came to Jesus and asked, Lord, how many times shall I forgive my brother who sins against me? Up to seven times. Jesus answered, I tell you, not seven times, but 77 times. Therefore, the Kingdom of Heaven is like a king who wanted to settle accounts with his servants as he began the settlement. A man who owed him 10,000 bags of gold was brought to him since he was not able to pay. The master ordered that he, his wife and his children and all that he had be sold to repay the debt. At this. The servant fell on his knees before him. Be patient with me, he begged and I will pay back everything. The servants of master took pity on him. Cancel the debt and let him go. But when that servant went out, he found one of his fellow servants who owed him 100 silver coins. He grabbed him and began to choke him. Pay back what you owe me, he demanded. His fellow servant fell to his knees and begged him. Instead he went off and had the man thrown into prison until.

The other servants saw what had happened. They were outraged and went and told their master everything that had happened. Then the master called the servant in you wicked servant. He said, I. The fellow servant, just as I had on you. In anger. His master handed him over to the jailers to be tortured until he should pay back all that he owed. This is how my Heavenly Father would treat each of you unless you forgive your brother or sister from your heart, the word of God. Please be seated. Today. I want us to see four things in this passage of Scripture. First of all, I want us to see the extent of forgiveness. The extent of forgiveness. Then we’re going to see the receipt of forgiveness. Thirdly, we’re going to look at the denial of forgiveness. And then lastly, we’re going to look at the consequences of unforgiveness.

Let’s begin with chapter 18, verse 21. As we look at the extent of forgiveness, Peter came to Jesus and asked Lord, how many times shall I forgive my brother or sister who sends against me? Up to seven times. Now, Jesus again had been teaching on forgiveness beginning in verse 15, and this prompted a question in Peter’s mind. And he went to Jesus after the teaching, and he said, Lord, how many times shall I forgive my brother? Up to seven times now, when he said up to seven times this was a a wonderful offering of generosity, because back in this day, the Jewish rabbis taught that you are only obligated to forgive up to three times, but on the fourth offense, you are under no obligation to forgive.

So when Peter comes along and says, Lord, shall I forgive my brother? Up to seven times he was offering more than double what the religious leaders of the day demanded. That’s very generous. And certainly he had been with the Lord, been walking with the Lord all this time. He saw the generosity of Jesus and the forgiveness of Jesus. And certainly by such a generous offering of forgiving up to seven times he was emulating his Lord. He was certainly expecting, no doubt, accommodation for such a magnanimous offering of forgiveness. But Jesus blew his mind. Jesus said, not seven times, but 77 times.

The number seven, as many of you know, is symbolic in scripture for completeness. Completeness. So here’s what Jesus is saying. He has taken this number and multiplying it many times over. And he says, the point is you should forgive someone as many times as it takes to completely forgive them 100% from all their offenses, whether that’s seven times, 77 times or 490 times. Completely. So here’s the essence of Peter’s question and the essence of Jesus answer, Lord.

Is there a limit?

Jesus response was, no, there’s none. There is no limit to forgiveness. So we see here Jesus answer and he comes back. This is astounding to Peter and all the disciples who are looking on. And here’s why. Because they were still living under the Old Testament. Where a tooth for a tooth. You hurt me. I hurt you.

This law of retribution. No one had ever heard of this before. This was new. This was amazing. This broke all the paradigms.

God wants you and I want you to realize that there’s absolutely nothing you can do to pay off the debt of sin.

At the mercy of the Lord. Kindness and richness to us came to this earth that on the cross you talk about extreme forgiveness. Really, it doesn’t get more extreme than that. He canceled the debt.

God has shown us amazing pity and compassion by forgiving us an incalculable amount of sin against him. We should then be quick to forgive. Or compared to penance of sin to those who sin against us.

If we harbor unforgiveness in our heart toward a brother or sister, we have moved ourselves from the blessing of God, the protection of God and into a place of the discipline of God. We all know that’s real. We’re talking about a father who disciplines his children when they’re out of line like a loving father does. The scripture talks about this.

But as a general rule, as a paradigm, not the world’s paradigm, but a Kingdom paradigm, we don’t harbor unforgiveness. We don’t. That’s not what Christians do. Christians forgive.

Forgiveness is simply a decision. That’s it. It’s a decision. You choose to forgive. Now, sometimes we have to make that decision more than once, don’t we? There’s real life, real pain, real circumstances. You know, in a perfect world, we choose and we can do it. But sometimes you choose to forgive and tomorrow you may have to make that same decision again. And then maybe the next day, but eventually you’re going to make that decision and it’s going to stick. And then you will begin to experience not the discipline of God, but the blessing of God. And part of that blessing is His healing of your heart. And that’s what that’s what it’s all about.

Why do we forgive? Why is it important to forgive? There’s a lot of reasons for this. But I’m going to say only to. One. Because when we forgive, we emulate God. God is a forgiver. He has forgiven us 10,000 talents. And because we have this platform that I spoke of at the beginning of the forgiveness, the way of experienced, we can now forgive others. Listen, we don’t do this in the flesh. That’s the world’s paradigm. We’ve got to do it in the spirit and the strength of God. That’s the biblical paradigm, the kingdom paradigm.

And we’ve got to operate out of that. What does the Bible say? The Bible says that the fruit of the spirit is love. Where forgiveness starts from. Love. Why did why did Jesus come and down the cross for us? Because he loved us, remember? That’s the only thing we had to go on for us. Why would we forgive somebody else? Because, number one, God demonstrated his love for us that while we were still sinners, Jesus died. And the command. The first commandment is to love the Lord your God with all your heart, soul, mind, strength, everything you are. What’s the second greatest commandment? Love your neighbor as yourself. And that’s where forgiveness comes from. And by the way, love is not a feeling either. It’s a choice, just like forgiveness is. It’s a decision. We choose to be obedient, even though it’s tough sometimes. So why should we forgive, number one? Because when we forgive, we are like our Heavenly Father. We emulate Him. And secondly, as I mentioned a moment ago, forgiveness brings healing.