How to Live With Purpose in a Hostile World: Living like Esther in “Such a Time as This” 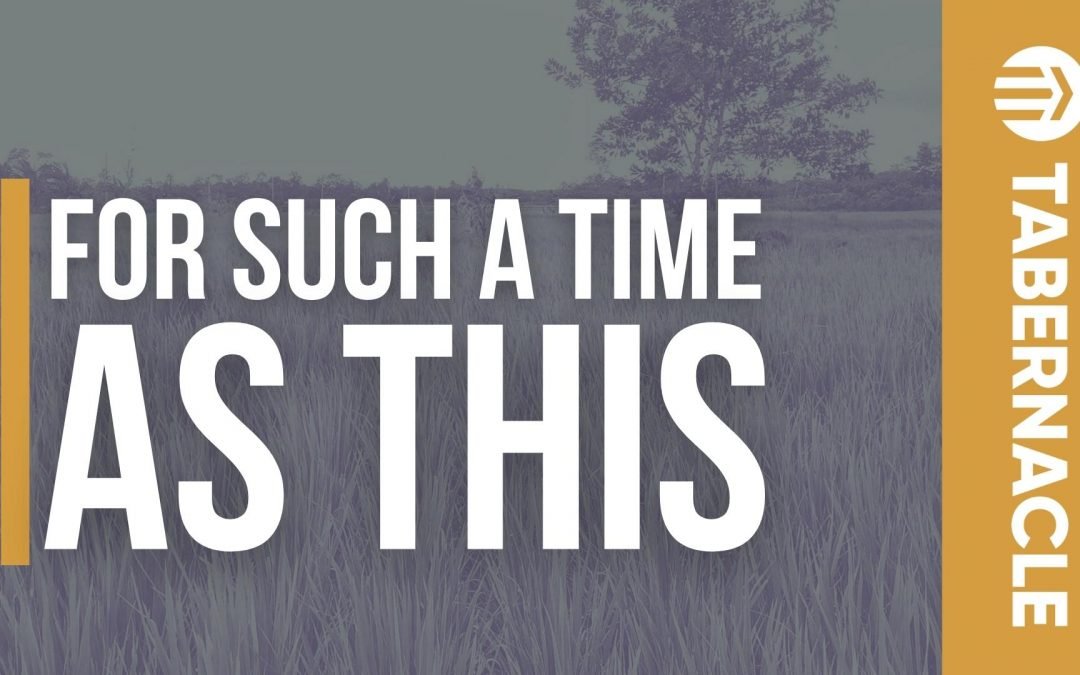 How to Live With Purpose in a Hostile World: Living like Esther in “Such a Time as This”

Have you ever been stuck asking God, “What are you doing?” We are called to live with purpose, but God doesn’t always give us the blueprint ahead of time. Like Esther, we have to take a step of faith, and when we do, we might find that we were made “for such a time as this.”

Esther Chose to Live with Purpose

In Esther chapter four, she faces a scary dilemma. The king has decided to kill the Jewish people, but He doesn’t know that Esther is Jewish. As the king’s wife, she wants to use her influence to save her people. However, doing this would put her own life at risk. She has no assurance that revealing her ethnicity won’t put her life at risk. On top of this, she would have to approach the king without being invited, which is forbidden and punished by death.

When Esther told her uncle Mordecai about her fears, He challenged her. In Esther 4:13-14, he says, “Don’t think that you will escape the fate of all the Jews because you are in the king’s palace. If you keep silent at this time, relief and deliverance will come to the Jewish people from another place, but you and your father’s family will be destroyed. Who knows, perhaps you have come to your royal position for such a time as this.”

We all face difficult decisions about how to live out our faith. We live in a post-Christian world that is not always friendly to followers of Christ. The majority of our biblical values now contradict the values of our culture. We are seen as close-minded when we stand up for our beliefs. However, sometimes we end up in situations like Esther’s when we don’t know what God’s doing and don’t have any assurance that standing firm will end well. People lose their jobs, see family relationships strained, and sometimes even lose friends when they take a stand for the gospel. These are high stakes.

In that moment, Esther was overcome by her fear. She knew the stakes were high. She would be putting her life on the line. The last time his wife opposed him, he banished her. So when Esther went to Mordecai for advice, he reminded her of the bigger perspective. God always finds a way to save His people. So Mordecai challenged Esther to take the risk and trust God knew what He was doing.

The same is true in your life. God placed you in this school, this family, this church, and this job for such as time as this. God doesn’t make mistakes, so you are here for a reason.

When you are presented with big risks and high stakes, do you trust God? It’s far easier to worry about everything that could go wrong. However, the Bible shows us over and over that God is in control and He has a larger plan even when we don’t see it at the moment. Do you believe He is worth the risk? Do you trust Him to care for you even in the worst-case scenario?

Once Esther gets Mordecai’s input, she knows what she needs to do. Instead of focusing on what could go wrong or running away from hardships, she lives with purpose. She knows she has an essential role in the situation and adjusts her perspective to focus on how she can serve others despite the problems that may arise.

Maybe you’re sitting there saying, “My job has been miserable. I don’t know why God still has me there. It’s been so difficult.” Have you considered that God might have you in that job because you have a coworker that desperately needs to hear the truth of the gospel? On the other hand, maybe you’ve felt discouraged because of family conflict. Instead of running away from hard conversations, you can focus on pouring into your family. You can raise up a generation of Mordecais and Esthers who will stand firm on the truth of the gospel no matter what is going on.

In Matthew 9:37-38, Jesus presents a problem: “The harvest is abundant, but the workers are few.” In this statement, He tells His disciples that they can’t afford to waste time or let life pass them by. There are people all around us that are hungry for Jesus. If you’re in survival mode and unprepared for the ministry opportunities God sends your way, you will miss them. We are the church. We are the workers. God has commissioned us to go out into the world with intentionality. We need to be prepared, so we don’t miss the “harvest” moments.

People of Purpose Leave the Results Up to God

Esther knows that she can’t control how the king responds. All she can do is obey and trust God. So in Esther 4:16, she tells Mordecai, “Go and assemble all the Jews who can be found in Susa and fast for me. Don’t eat or drink for three days, night or day. I and my female servants will also fast in the same way. After that, I will go to the king even if it is against the law. If I perish, I perish.”

She leaves the results up to God, but she also spends extra time in prayer, committing herself to the Lord. As you step into more purposeful living, are you willing to cut out things that get in the way? For example, she and her servants spend time fasting. They cut something out of their lives to focus their minds on God. Maybe instead of spending the weekend watching TV with your family, you need to spend time in God’s Word together. Perhaps instead of spending your free time on social media, you need to commit an hour to prayer each day. If you say the most valuable time in your life is time with God, but you never spend time with God, that’s a good indicator you need to adjust your priorities.

Paul discusses this in Philippians 1:21, saying, “For me, to live is Christ and to die is gain.” Everything else takes second place for Paul because He puts Christ first. He echoes a similar sentiment in Philippians 3:7-8 when he says, “But everything that was a gain to me, I have considered to be a loss because of Christ. More than that, I also consider everything to be a loss in view of the surpassing value of knowing Christ Jesus my Lord. Because of him I have suffered the loss of all things and consider them as dung, so that I may gain Christ” When we put Jesus first, everything else falls into place. His plan is always best, and He is worth every sacrifice!

Esther could have saved herself by keeping quiet and saying nothing. But she chose to be obedient to God, saying, “If I perish, I perish.” Do you believe that? Do you believe that following Jesus is better than any comfort this world has to offer? Are you willing to put your job or reputation on the line to be a light in your workplace? Are you willing to receive judgment from friends for standing on the truth?

When we are willing to leave our comfort zones to proclaim the truth of the gospel boldly, we can play a purposeful part in God’s plan. Esther knew this was worth the risk. Paul says this is worth the sacrifice. Do you believe this? If you hold firmly to that truth, can you imagine what God could do through you for the Kingdom?