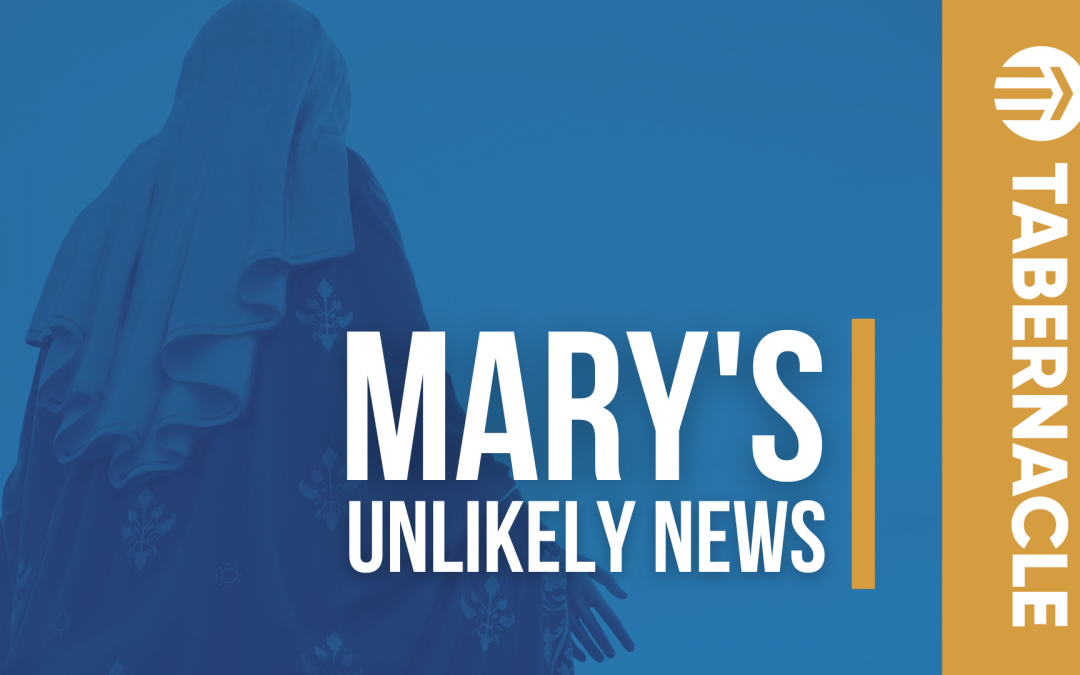 The story of Christmas is filled with a wide array of characters that have become beloved parts of our Christmas plays and nativity scenes each year. But sometimes, it’s easy to forget they were real people with true stories. We can find hope in their stories because they were real people. They were living sinful and messy lives, just like you and me. So instead of putting them on pedestals, we can be encouraged to see how God continually uses broken people to enact His perfect plan. The story of Christmas shows that when He asks things that don’t always make sense, our obedience paves the way for beautiful things to be done through our lives. Mary is a vital example of this. If you’re struggling to say yes to God today, Mary’s example can help.

In Isaiah 7:14, the writer foretold that God would send a sign to the people. A virgin would conceive and have a son, and He would be called Emmanuel. This prophecy was fulfilled through Gabriel’s announcement to Mary. When she heard that she would have a son, she asked the angel how this could happen. She was a young teenager who had never been with a man, not even the man she was betrothed to.

God Is Present with Us as We are Obedient to Him

Can you imagine what might be running through your head if you heard the same message? Even as the angel continued to share more information, your mind might be racing to understand how you could be with a child. You might be stuck trying to wrap your mind around such an announcement. “How can this be?” might have been anyone’s first question.

The angel responded by reassuring her that God would be with her. He told her that nothing would be impossible with God. This amazing truth is easy to forget when we’re up against impossible odds. So many things in our lives feel impossible, but like Mary, we must remember that God can do anything. God has no limits and knows no bounds. So Mary responded with faithfulness and obedience, saying, “May it happen to me as you have said.”

We Can Respond to His Power with Humility

Even with the obedience she expresses, she must have wondered what would happen next. How would her family respond? How would her fiance respond? Would she become a social outcast? Surely, no one would believe she was pregnant because an angel came to her and the Holy Spirit overshadowed her. Mary’s life was about to change forever. It would never be the same. Yet, she remained faithful as she walked through great uncertainty.

Before Mary had all the answers explained to her, she obeyed. She trusted that God would provide for her needs. But she didn’t have the blueprint or the five-year plan spelled out. She didn’t even know if Joseph would believe or continue to marry her. For all she knew, she might be thrown out and shunned by everyone she loved. All she had was an announcement from an angel telling her that ancient prophecies would be fulfilled through the work God was doing in her life. It must have been scary not knowing anything about the future. Yet, she submitted to the words of the Lord and said, “I am your servant.”

God Works In Us Before He Works Through Us

God is not primarily concerned about results. He knows He will have victory at the end of time, so He’s not worried. What He cares about more is the condition of your heart. Do you trust Him enough to obey Him as Mary did? Do you believe He will keep His promises to you? God often works in our hearts before He does work through us. He doesn’t just want to use you to achieve a goal. Instead, He cares about you as His child and wants to do work within you to bring transformation and redemption.

In Mary’s case, God was not only working on her heart, but He was literally forming the baby Messiah within her womb. Whether it was to delay the gossip spreading around town or to talk with someone who might understand, Mary decided to visit her cousin Elizabeth for a while. Before Mary spoke any words, John the Baptist leaped in Elizabeth’s womb. Before he was even born, he acknowledged Jesus as Messiah. The Holy Spirit gave Elizabeth insight into why her baby reacted with such joy. She knew Mary’s baby would be the Messiah they had been waiting for.

How special must it have been for Mary to have someone to celebrate this miracle with? Elizabeth experienced a miracle, too, when she became pregnant in old age after years of infertility. Then, finally, the two women could look each other in the eyes and know that God had favor on them. So Mary responded with praise because she knew they had been blessed.

It’s easy for people to put Mary on a pedestal because she was the mother of our Lord. But that was not Mary’s response at all. She acknowledged that this was not about her. She responded with a song of praise that many call the Magnificat. She felt blessed that God used her, but she knew this story was much bigger than her. Do we respond with the same grace and humility when God blesses us?

This teenage girl who had her whole world turned upside down, and didn’t understand everything that was happening, still responded with such obedience. Unlike Zechariah, who doubted God’s plan when he didn’t understand it, Mary reacted with praise. Elizabeth saw both of their responses and felt blessed to be with Mary to experience God’s goodness.

You might say, “God, I don’t understand what’s happening. What is going on? Why are you allowing me to go through this?” What if we, like Mary, responded with obedience amid our trials? Like her, we can say, “I am the Lord’s servant. May it be done according to your word.” Think about the powerful testimony that we could give. Even during difficult trials, and even when we don’t understand how God might be working – what if we were willing to get up and proclaim that it’s not about us, but it’s all for God’s glory? Like Mary, our humble submission reveals how God can work in us and through us.

Do you know something God is asking you today? Is there a form of obedience you’re learning to walk in? It’s uncomfortable because it requires both submission and faith. Mary’s story shows us that God is trustworthy. You don’t need to worry if He will uphold His end. He always keeps His promises. God is always faithful, so the question is: are you?