Repenting of Being Spiritually Lukewarm 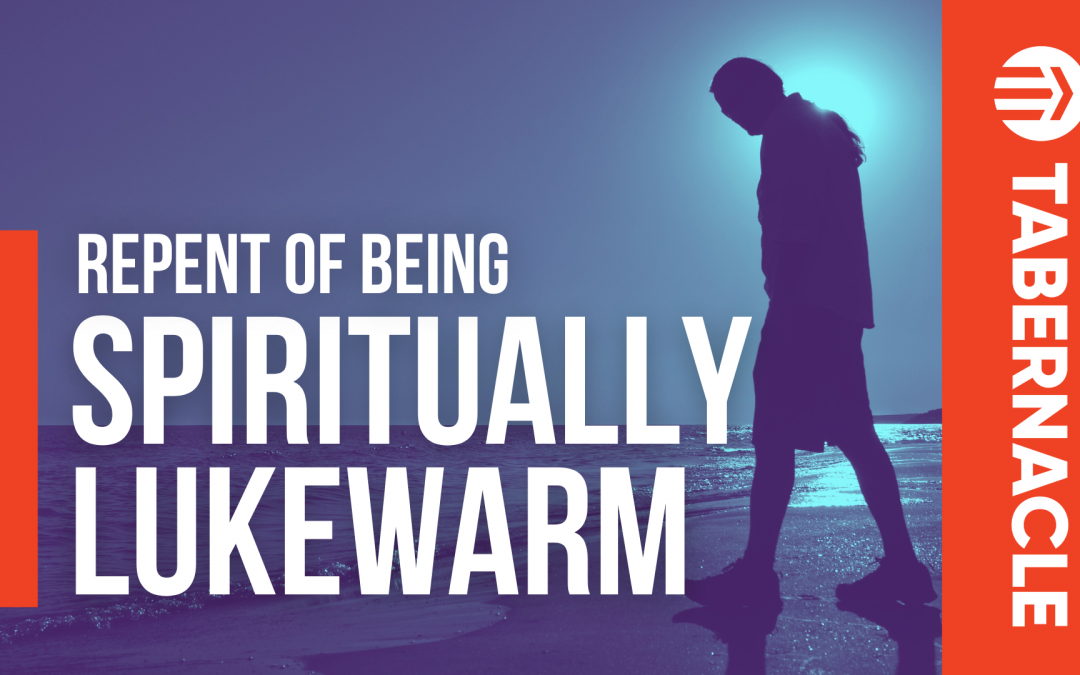 WATCH THE SERMON
Happy Father’s Day. Being a dad is no joke. And while this message is for everyone, I really want to call out dads today. After children leave high school, one of the main reasons that they don’t stay in church, is because they go to a church off to college.

When they’re off to college or in whatever season they find themselves, it’s generally because they never saw the Christ-life modeled at home in a passionate way.

So today, let’s think about a decision that you can make today that will affect generations to come.

14 “To the angel of the church in Laodicea write:

These are the words of the Amen, the faithful and true witness, the ruler of God’s creation. 15 I know your deeds, that you are neither cold nor hot. I wish you were either one or the other! 16 So, because you are lukewarm—neither hot nor cold—I am about to spit you out of my mouth. 17 You say, ‘I am rich; I have acquired wealth and do not need a thing.’ But you do not realize that you are wretched, pitiful, poor, blind and naked. 18 I counsel you to buy from me gold refined in the fire, so you can become rich; and white clothes to wear, so you can cover your shameful nakedness; and salve to put on your eyes, so you can see.

19 Those whom I love I rebuke and discipline. So be earnest and repent. 20 Here I am! I stand at the door and knock. If anyone hears my voice and opens the door, I will come in and eat with that person, and they with me.

21 To the one who is victorious, I will give the right to sit with me on my throne, just as I was victorious and sat down with my Father on his throne. 22 Whoever has ears, let them hear what the Spirit says to the churches.”

Have you ever picked up a cup filled with coffee and expected it to be hot, only to find it cold or lukewarm? What did you do or what were you attempting to do? Probably spit it out.

Have you ever picked up a Coke or a Dr. Pepper expecting it to be ice cold and bubbly and carbonated, only to find it hot or lukewarm and flat? What did you do? Well, you’re probably tempted to spit it out. Why? Because unless you’re just craving some type of caffeine hit or sugar rush, they’re good for nothing. And that’s exactly what Jesus is communicating to these Christ-followers in Laodicea.

The Laodiceans had a reputation for saying and doing whatever was necessary to preserve their own well-being. But in contrast, Jesus spoke the truth. He begins by saying, “I am the Amen”. In other words, everything he says is true. We always want our witnesses to tell the truth, and Jesus is saying everything again. He’s the originator of God’s creation. Jesus was the Creator. He was there at the creation. He is eternal, having no beginning and no end. We need to make sure that we understand who Jesus is.

Then, we see the rebuke to the church.

We’ve seen this five different times in these seven letters, some type of rebuke, some condemnation Jesus gives.

15 I know your deeds, that you are neither cold nor hot. I wish you were either one or the other! 16 So, because you are lukewarm—neither hot nor cold—I am about to spit you out of my mouth.

In Hierapolis, the waters were hot and healing, and in Colossia, cold and refreshing. Both temperatures of water were beneficial, but lukewarm water was worthless and they knew that being called lukewarm wouldn’t be a compliment. It would bring to their mind this idea of gagging or spitting out, or, as Jesus says, You make me want to vomit you out of my mouth.

So what does lukewarm mean? It’s having or showing little ardor or zeal or enthusiasm. It means you’re just indifferent, half-hearted, partially committed, and that’s what these self-identified Christ-followers were.

They’d abandoned, dismissed, forsaken and walked away from the love they had for God and for other people before. He was going to get rid of them because they were living in this apathetic, complacent, lukewarm state.

They had no value when it comes to being representatives of him because of their indifference. They were like this because they had this affluent attitude. In other words, there was no outside pressure and no inside turmoil. They was complacency in the lives of these Christ-followers. The reason they were lukewarm is because they were trusting in their wealth instead of Christ. They were financially rich and had need of nothing.

Laodicea was an example of nominal, self-satisfied Christianity. It is probable that many of the church members were active participants in the affluent society and that this very economic affluence exercted a deadly influence on the spiritual life of the church.

Have we come to a place where we put more trust and faith and hope in our 401k than we do Christ? Because of our comfort and desire for material things, have we become complacent to spiritual things?

So, how do you know that you’re lukewarm? Well, I think there are several symptoms, but four of them are here.

If you’re not praying on a regular basis, communicating with God, or confessing your dependence and love for him, then you’re probably lukewarm.

If you’re not reading the Bible on a regular basis, you’re probably lukewarm. This is what sustains you spiritually. If you don’t have a regular diet of the Word of God, you’re not growing. We are to hunger for that pure spiritual milk of the word like a newborn who longs for milk.

If there’s no exaltation of God, no recognition of his grandeur and majesty and grace and being awesome, there’s no stirring in your spirit, no brokenness, no illumination of sin in your life as you see the holiness of God, then probably you’re lukewarm.

If you don’t enjoy being around those who are passionate for Christ because you realize how indifferent you are, then you’re probably lukewarm.

I preached in the pulpit at times being lukewarm, indifferent, and just going through the motions, because that’s what pastors are supposed to do. You don’t want to live there as you might find yourself right there right now.

If you find yourself in that condition, there’s an opportunity to change and to become zealous and fervent for the Lord. Remember, you’re only fulfilled when you are fulfilling the purpose for which you were created. There’s got to be some passion in your spirit when it comes to your relationship with God.

Because Jesus loves you, he rebukes you and disciplines you as any good father with his own children. He shows us the way to walk. That’s what we do as fathers. We rebuke, we chastise, we say, no, that is not the correct way. Be eager to repent.

If you wouldn’t wish your life in Christ what God is doing in you on anybody else, you’re probably lukewarm. Again, they thought they were rich. They thought they had everything that they needed. And Jesus says, You’re pitiful, you’re naked, you’re blind, and you’re poor. That’s what he’s saying. So in light of that, be zealous to repent.

Jesus is making this request for communion. This is the inner change or sharing of thoughts or emotions, intimate communication. We get to walk with God to understand which way to go in this next season.

In any relationship, you can have a relationship without true intimacy and fellowship. In this time, it was a significant occasion for having intimate fellowship with the closest of friends.

What about you? Have you shut Jesus out in this season, depending on material things?   You’re depending on your position in life versus relishing in the spiritual riches that are available to us. It’s easy to look at our world and our nation to think that the church might be reduced to ashes.

For those of us who are lukewarm, I pray that there would be some fire in our bones right now to repent and to be all that God has called us to be.