The Battle Belongs to the Lord 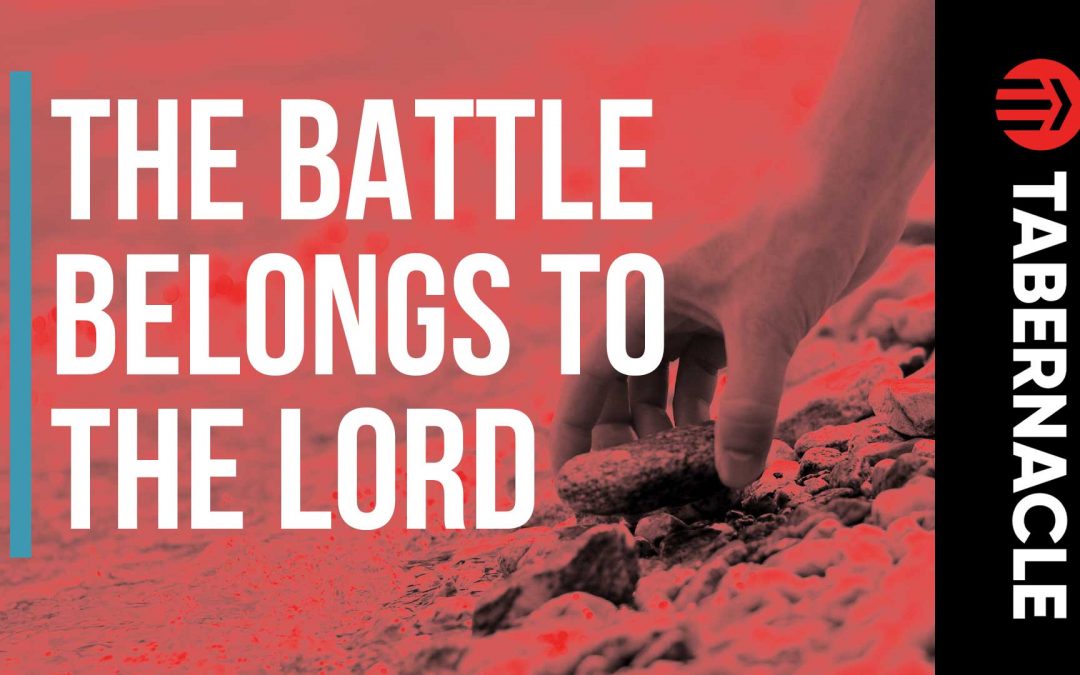 The account of David versus Goliath is one of the most well-known stories in all of the Bible. But instead of focusing on David’s story, we are going to focus on God’s story. Don’t get me wrong, many of the traits that David has, we can learn from, but this was God working through him. David did something impossible without Him. Let’s focus on what we can learn from this courageous story.

God chose David as his king, and Chapter 17 of 1st Samuel is what I would call a living illustration of what God taught us in the chapter before. David wanted what God wanted. David saw the world with God’s eyes. He looked past the flesh, and he looked at the heart and he wanted his heart to be right.

As we begin this amazing story, we see that the Philistines have gathered in Israel in the area of Judah, ready to take over the nation. It’s a valley that separates Israel from the Philistines. The Philistines are on one mountainside, camped out, ready to battle and there’s a valley. Then there’s the Israelites on the other side.

When you think they’re about to launch into this great battle, one man walks into that valley. Goliath. The Bible says he’s the champion of the Philistines. Goliath, in Hebrew, means the man in the between, signifying this pivotal moment and space between two enemies.

Goliath, nine feet and nine inches tall, was confident he would win. Not only was he a giant, but he had to be heavy and strong. His armor alone was about 126 pounds. He had to be massive. The Bible says he had a heavy spear with a 15-pound point on it.

Goliath steps on the field. And he mocks Israel. Verse nine clarifies the situation: if the man you choose can beat me, then then we will be your servants. But if I beat him, you will be our servants. That’s how one-on-one combat worked. Two men determine how the whole war goes.

Think about that. David, the underdog going against one man named Goliath. God’s name is on the line here. Saul knows that, which is why he hesitates to send out a warrior. Goliath is mocking Israel for 40 days in a row. Nobody answers the call.

God provided David, who is a solution to the Goliath problem. He’s tending his father’s sheep; though he had been anointed king; though he was the armor-bearer for the current king; he’s still taking care of his father’s sheep. His dad tells him to bring food. Before David leaves his father’s house, he finds another person because his father was getting old to watch over the sheep while he’s gone. David honored his father. He took care of what he needed to take care of.

A young David gets to the battlefield and his curiosity gets the best of him. He lets go of the supplies and runs to the front lines. He wanted to see what was going on between the Philistines in Israel.

He sees Goliath, this pagan Philistine walk back out on the field and mock Israel and mock God. Dave is in shock. King Saul says if somebody will defeat Goliath, he’ll give him riches, a tax-free life, and his daughter in marriage.

David doesn’t even address the reward. He is burning with fire with righteous indignation, holy anger against this Philistine that has mocked God’s armies and God Himself. That’s David’s chief concern. And he says, what are we going to do about this guy?

Everyone was a coward. It takes David, this shepherd boy, to do something about it. When he voices his decision, his brother mocked him and asked him if he belonged, by saying he needed to take care of the sheep. There are going to be people in your life. They’re going to want to distract you. Be like David, don’t get distracted. Keep your focus on the mission.

David meets with the king and says, I will fight this Philistine. In my translation, I think Saul goes, “Are you crazy? You out of your mind? You’re just a boy. And Goliath, he’s been fighting men since he was a boy.”

David is reducing Goliath to a beast of the field that is worthy of the penalty of death. He is blaspheming the God of the living armies. In Leviticus, chapter 24, verse 16, you realize that the penalty for blasphemy is death.

Saul gives David his armor. It’s hilarious. I’m sure when David is a little man, the young boy puts on Saul’s helmet, it probably falls below his eyes like a father’s cowboy hat on his toddler son. Can’t even see what he’s doing. It’s bouncing around. David says I can’t move in this stuff. And so, therefore, I’ve never used it in battle. He takes off the armor at that moment.

I think that’s a foreshadowing of who he would be. Except he would be a different kind of king than Saul as symbolized when the armor didn’t fit. David had everything that God is looking for on the inside. David took the weapons in the battle that God gave him: a sling, a stone, and a shepherd staff.

David’s power and David’s provision come from somewhere deeper. I believe in the very throne of God. So, he heads off to battle with five stones and a shepherd’s staff.

Goliath walks onto the battlefield with his shield. The closer he gets to David, the more incensed he is. He’s a giant of a man— a proven warrior. He’s probably done this a dozen times and now he sees David with no armor, no sword, and no shield. His pride thinking, are you kidding me?

In verse 45, David says: “The Philistine comes to me with a sword and a spear and a javelin, but I come to you in the name of the Lord of hosts, the God of the armies of Israel whom you have taunted.”

It’s not David’s battle, it’s God’s battle. The battle belongs to the Lord. The rest of the Israelites army runs away, David charges.

Then he takes that one stone out of his bag.

He slings the slingshot.

David then walks up to him, takes Goliath’s sword, cuts off his head, and then goes back to the Israelite army in God’s victory.

I want to be like David, but I’m not. And neither are you. Whether it be physical, emotional, or spiritual, and you come on your own with just some sticks and a stone, here’s what’s going to happen. You’re going to get your teeth kicked in. That Goliath is going to step all over you and he’s going to destroy you because on your own as a human, you can’t defeat Goliath.

The one stone that matters was David’s faith in God. It was the faith that David had in God that sparked his righteous indignation to stand up for God’s name when no one else would. God gave him the courage to face the Goliath of which he could not win on his own. David had to trust his Heavenly Father more than men.

It’s not about your mental abilities; the fatness of your bank account; your athletic prowess; your good looks; none of that matters. What matters is who you have on the inside.

The battle belongs to the Lord.

When you trust in Christ completely, he can give you the courage needed to face any challenge for his glory.