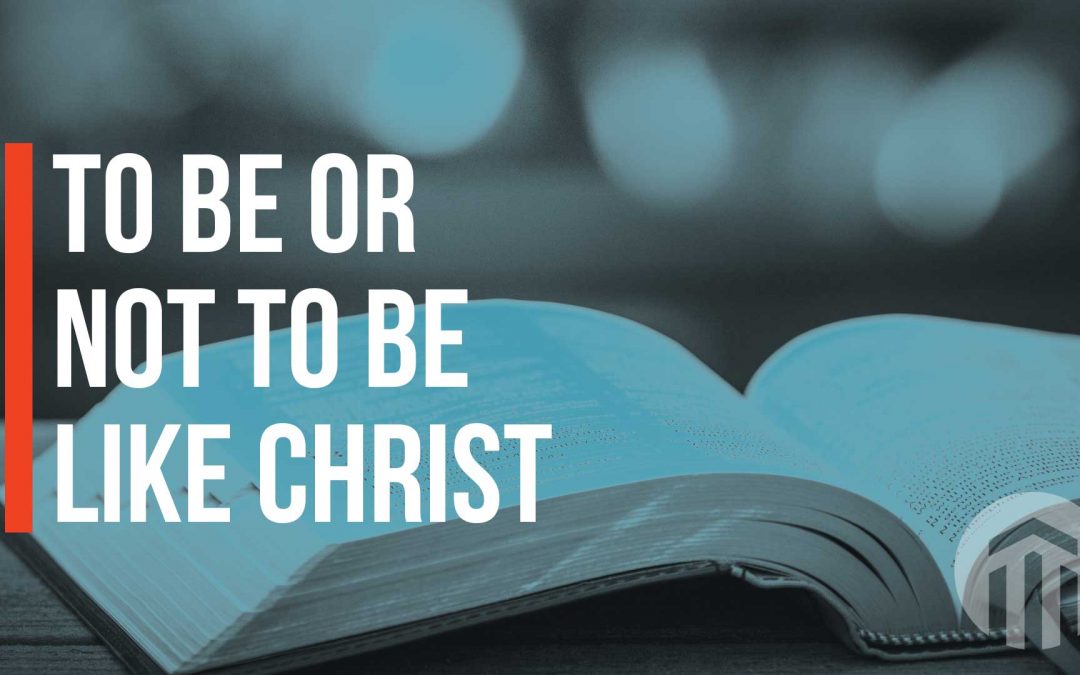 Each day we must each decide whether we are going to be like Christ or not be like Christ. That’s the question that Peter addresses in the first few verses of First Peter Chapter 4. Say yes and be a world changer. Say no, and the world will change you instead. Which will it be for you?

Peter addresses a group of believers that are struggling in a similar way to what we face today. There was a multitude of religions and gods and all different forms of morality. Society took high offense to you saying, “my God is the true God, and this is what truth is”.

Today, culture says you can claim any truth you want to claim, as long as you don’t claim to have absolute truth as we claim as Christians. So how do you live? I believe Peter helps us answer that question.

Arm Yourself with the Resolve of Christ

Peter’s calling us to live the name we bear. You can’t just call yourself Christian. You can’t just claim Jesus as savior. But we must live like Him, which means your attitude must be like His attitude.

Jesus lived the same alone, with disciples, people who wanted to persecute Him, sinners, and all people— His attitude was honoring to God. He was willing to suffer rather than give in to sin.

You can choose to go with how the world defines life and sin, and if you say no to that, you are going to suffer on social media, in your job, maybe even in your family. Are you ready to do that?

Peter uses the word to “arm” ourselves for battle. We’re in a war. Not with each other, but with the enemy, Satan, the Great Deceiver. You’re already going to survive. As Christians, we know Jesus wins the war. But I’m talking about representing Him properly in the battle.

Arming ourselves describes a soldier who prepares his body, his spirit, and his mind for battle. You train your body mentally. The battle is not just a physical battle, it is a mental battle as well.

What will I have to sacrifice? This is a question you may be asking yourself as a Christian. Am I willing to make that sacrifice and decide it beforehand so I can represent Him well?

The Story of a Christian Hero

I can remember one time I was in class, and I saw this young lady sit next to me. She walked with a severe limp. I started interacting with her like all the other students. But the more I got to know Carrie, I realized that not only did she had this mindset, but she was a Christian hero. Kerry got that limp, serving as a missionary alongside her husband in Iraq.

They went there at the height of the Iraqi war in response to 9/11, it was in March 2004 that Carrie McDonall and her husband, David, with three other missionaries, were traveling in Iraq and they were ministering to a group of displaced Iraqis because of the war. They started to get together as a team and think about how they could meet the needs and how they could share the Gospel.

The five of them got in their vehicle to head back home. They had to pass through Mosul, a dangerous city at the time. Traffic stopped and they found themselves with cars on every side, they couldn’t go anywhere and suddenly terrorists came out of the vehicles and surrounded them.

The attackers started firing automatic weapons. When they thought that they were all dead, the gunfire stopped. Carrie was shot twenty-two times but was still alive. She looked in the back seat, all three of those missionaries were dead. She looked to the driver, who was her husband, David, and he was clinging to life.

A Muslim man came up to the car and stood there looking at her because it wasn’t proper for a man to touch a woman, especially with her skirt that was above her ankles. He did the courageous thing. He reached down and he pulled her skirt below her ankles and helped her and her husband out.

The United States military rescued her on the helicopter with her husband, David. She soon passed out because she was bleeding severely. They kept her in a medically induced coma so that her body would have a chance of surviving.

Carrie McDonall woke up 10 months later in a hospital in Texas. She woke up realizing David didn’t make it. He died from his injuries in Iraq, serving the Lord. The other three missionaries are Martyrs for the Gospel of Jesus Christ.

She said, “My husband, David, and I knew the dangers of going to Iraq, a war-torn country as missionaries, but we went anyway.” There was the mindset that Peter’s talking about.

All of us are called to let Christ live through us. Suffering will come, mocking will come. Prepare yourself now so it doesn't surprise you then. – Pastor Todd Lamb Click To Tweet

To honor his sacrifice, we daily strive for perfection though we will fall short. You can give God your best effort. You can be like Christ.

We are all new creations in Christ. It’s hard to say goodbye to the old and stay only in the new. We all struggle, whether you have been deeply drunk with worldly lust or just tasted it, we all fight it, don’t we? Sadly, today, instead of coming out of a pagan lifestyle, most of us who are in church today came from a Christian culture, but we are now allowing the pagan subculture to infiltrate the church.

I believe what we’re trying to do today is redefine sin. This is what the Bible says it is, but we don’t like that definition. We try to redefine it into something that makes us feel good. You can redefine sin, but it does not matter what your definition of sin is. It only matters what God’s definition of sin is because He’s the one that’s going to judge it.

In chapter 4, verse three, Peter goes on to list categories of sin that they struggled with two thousand years ago, but it is so relevant to us today.

Peter talks about unrestrained sexuality. This can be premarital sex or extramarital sex. It’s anything goes. He mentioned lusts and the desire for sensory satisfaction above spiritual renewal. If it feels good, you must do it.

Peter mentions drunkenness, carousing, and drinking parties. All three of these include the same excessive lifestyle. It can be excessive drinking or excessive eating. Drunkenness is not just drinking. Just like gluttony is not just eating. It’s the abuse of it, overconsumption, and lack of control.

Peter ends with idolatry, something that you have in your life that you give more importance to than to God. Peter calls it a detestable idol, which means it probably included something despicable or lawless according to the word of God.

It’s a good reminder that when you allow an idea to come into your life over and above God and let it distract you from God, it can lead down a very dark path. All idols are despicable.  Ask yourself, what is that thing in my life that I give time to that distracts from God? That might be an idol, money, or drinking.

Be Alert and Love Deeply

In 1 Peter 4:4-6, Peter is saying don’t be surprised when you’re making war against the lust of the flesh and the world doesn’t like you very much.

New believers or those of you who re-commit to be Christ-like, you may have old friends or family members that just don’t understand. Be patient with them. You don’t have to fight them. They may just want to know what happened to you. Peter says you need to be ready with an answer for that.

The world is miserable in sin and when they see you trying to get out, they want to pull you back with them. The good news is they can’t. God will pull you right out of there because the Gospel is what saves you.

You don’t have to be bothered by what the world thinks or says about you. Have you as an individual trusted in Jesus Christ as your Lord and savior? If not, you have nothing to arm yourself with. You’re all alone

Repent of your sin, believe in Jesus Christ, and live like Him.