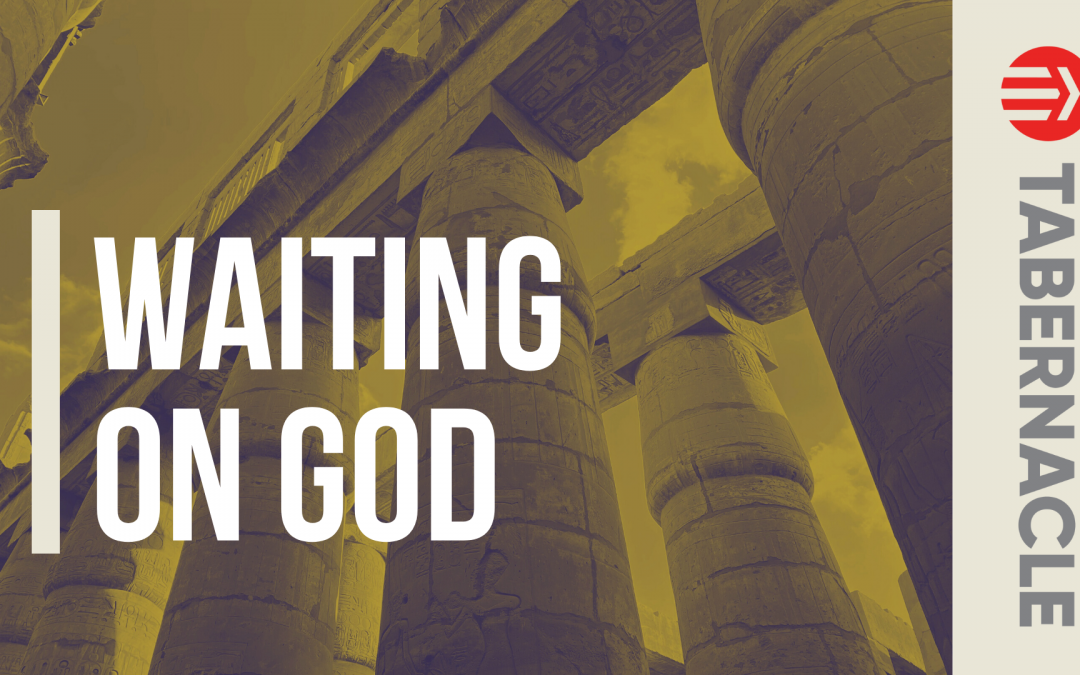 WATCH THE SERMON
My mother got COVID in March 2020. She became very ill in the beginning when most people didn’t know how serious the pandemic was going to be. She was in the hospital for ninety-nine days— twenty-nine of those days was on a ventilator. The doctor told me three times that she was likely not going to make it.   God had other things in store. On the 100th day, she got to go home from the hospital. She arrived with fewer toes because she lost circulation and they had to amputate her at the hospital. But a few months after, she and my dad had our entire family over for Thanksgiving 2020 and she cooked the entire meal.   We were waiting on God. He answered our prayers. The Lord healed her and we are grateful for His miracle every day. This Thanksgiving, we celebrate more time with her and the blessings we have in life.   Today, we are waiting in God as a church family. As we search for a new pastor, we find ourselves in a moment of transition. Identifying the right pastor that God has for us requires patience. It requires us to wait on God— for His timing and His direction.

I Want to Retell a Story

It’s a story from the Old Testament, and I learned a very important yet simple truth of how God works through these times.   Joseph was one of 12 sons at the time and his father was Jacob. He was the favorite son. That didn’t make him popular with his brothers. He would also come across as arrogant and his brothers eventually wanted nothing to do with him.   So they decided to get rid of him. They wanted to kill him but one brother convinced them to spare his life and sell him as a slave to Egypt. Joseph finds himself, 17 years old, shackled with chains. He is totally dependent on God.   As we know from the Bible and in our own lives, God always has a plan— and He was up to something. Joseph had no idea but there was something big for him. Could that be true in your own life? Could that be true as we’re in transition? We might not see everything, but God is always doing something big for His Kingdom.   God was taking this 17-year-old boy, Joseph, and He was strategically positioning him to raise a nation— from within the nation— where the Messiah would ultimately come and save the entire world. This rested on a teenage slave.

“Your circumstances do not dictate your faith.”

Joseph was taken to Potiphar, one of Pharaoh’s officials, to be his slave. How could God be with him during these times? As we later learn, things keep improving for Joseph. In Genesis 39:5 we learn that God has been blessing Potiphar’s household since Joseph arrived.   But just as things seem to be turning around for Joseph, things get worse.   Potiphar’s wife tried to seduce Joseph more than once. Saying no could get him killed and doing what she asked could also get him in trouble and compromise his integrity. It was a no-win situation.   At her final attempt, he refuses and runs away, while she tears a piece of his clothing. His response to her before fleeing was: “…How could I do such a wicked thing and sin against God?” Somehow, Joseph knew, although God may have been silent, He was not absent. Do you remember how Joseph was rewarded? He’s framed for rape and Potiphar throws him in Pharaoh’s dungeon.

The Lord Was With Joseph

Joseph is in prison and he barely knows the language. He finds himself waiting on God. But his story continues. The Bible says that the Lord was with him. He showed him kindness and granted him favor in the eyes of the prison warden. Although God may have been silent, God was not absent from Joseph’s life.   Do you know why he found favor? Joseph did what anyone would do who is absolutely confident that God was with them. That’s what Joseph did, and that’s why the Lord was with him.   In Chapter 40, Joseph has a glimmer of hope. Pharaoh got mad at his cupbearer and the baker and threw them in prison where Joseph was. Both of them mention a dream that they had. He listens and tells them he could interpret it through God.   Joseph interprets. Both of them would be released in three days. The cupbearer would be reinstated and the baker would instead be hanged. Joseph asked that he would be remembered and mentioned to Pharaoh, but he is forgotten. Again, it is not in his control and he must wait for God.

Paul then says to not let unwholesome words proceed from your mouth. How many times do you say a joke that shouldn’t be said? Or gossip about someone? This is dishonoring to God. The first step is asking God to help you find victory in the struggle. If you never admit you have a  problem, what makes you think you’re going to find victory? I know that people at your work, school, and your everyday environment may be nasty in their speech, cursing, and disrespectful. It doesn’t give you the green light to participate. Have a different standard for yourself and refuse. Be part of the solution, not the problem. Paul says to avoid all kinds of malice. When you let anger muster, it turns to bitterness and wrath. Wrath means getting back at somebody’s rage and blasphemy.Does this sound like a life that’s good for you? God gave you the spirit at salvation to help you say goodbye to the old and say yes to the new. Renew your mind. Transformation is the goal.

How many of us have gone through something like this? We had a plan and the door shuts because God has had one all along. God said: my ways are higher than your ways. It’s not for us to understand. It’s our job to trust that He is with us.   Our responsibility is to wake up every day and ask the question, what would someone do in my circumstance, if they were absolutely confident God was with them?   The Bible tells us that two years went by for Joseph, and although the cupbearer had forgotten him, God had not forgotten.   Do you ever feel forgotten? Though others may forget you, God never does.   Then God moves. Pharaoh has a dream and calls everyone he relies on to interpret: wives, counselors, anyone who may know something. Finally, the cupbearer remembers Joseph and mentions that he knows someone who can interpret dreams.   Pharaoh said to Joseph: I had a dream and no one can interpret it. Joseph gives God the glory: I cannot do it, Joseph replied to the Pharaoh. But God will give Pharaoh the answer he desires.   Tabernacle Church, we need to remember that. All blessing and power come from God. God will provide and will be there for us when we feel like we’ve been forsaken. We can count on Him.   Joseph said that because he was confident in waiting for the Lord. No matter your circumstances, God’s plan prevails. Your circumstances do not dictate your faith.   Joseph interprets the dream and tells Pharaoh of a famine that will soon come. Not only does he tell him what’s going to happen, but he lays out a plan and an economic strategy. He speaks with confidence, not telling the Pharaoh what to do, but interpreting his dream of what is to come. Pharaoh is so impressed and grateful for what Joseph has interpreted through God, that he makes him in charge of Egypt under him.   This would be impossible without God. A foreigner was sold into slavery, and in just a few years, a master of an entire kingdom. He waited on God and the Lord provided something no one would have imagined.

A Plan for Tabernacle

God is going to be with Tabernacle in this time that we’re waiting on God. I am confident in that. The same God of Joseph is with us. It doesn’t matter if you’re going through major health challenges; if you’re in a financial trial or relational troubles. No matter our circumstances, we have the confidence that God is with us.   For the last 14 years, my wife and I have been waiting on God to heal her from a rare autoimmune disease.   This disease has attacked many parts of her body. She has had 75 surgeries in the last 14 years. We just had one recently and have another one coming up. I stepped down as an executive pastor at a church to take care of her.  She and I made that decision and commitment knowing that things were going to change, but we were hoping that God would still allow us to continue to serve Him through church consulting and other ministries.   Since that time, we’ve been very blessed. We’ve started nonprofits and I have my church consulting firm. Over the last 14 years, we’ve been able to serve and help over fifteen thousand churches in over 50 countries. We’ve also had the honor to help great churches like Tabernacle Church and get to experience God do some amazing things.   We could have never imagined while we were waiting on God to heal my wife, Cindy, that he had something even bigger in mind. We had moments of doubt but we’re confident that God would step in.   We are in a season at Tabernacle of waiting on God to bring the next pastor and God is going to do something amazing. We must walk in confidence knowing He has a plan for all of us. Like Joseph, we are patiently waiting for God to powerfully move.
WATCH THE SERMON